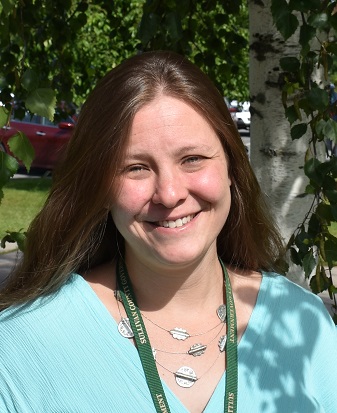 Monticello, NY – Sullivan County Deputy Planning Commissioner Heather Brown has been appointed Chair of the Climate Action Committee of the NYS Association of Counties (NYSAC), one of the most influential advocates for the State’s 62 counties.

“I am honored and humbled by this appointment,” noted Brown, who has served as vice chair of the committee since its 2019 inception. “Typically only elected officials serve as committee chairs, but NYSAC recognizes the efforts and successes of Sullivan County in climate action initiatives, and they know I bring that knowledge and experience to the table.”

NYSAC represents New York counties and their taxpayers before Federal, State and Local officials on matters germane to county governments, and informs its membership and the public at large on issues of importance to counties. The Albany-based organization educates, trains and provides research on public policy to Federal, State and Local officials and to the membership on a variety of issues.

“On behalf of the New York State Association of Counties, I congratulate Deputy Commissioner Brown on her new role as Chair of the NYSAC Climate Action Committee,” said NYSAC President and Clinton County Administrator Michael E. Zurlo. “Sullivan County has been on the forefront of the local response to climate change, and Deputy Commissioner Brown brings a wealth of knowledge and experience on this issue that will be a major asset to the Climate Action Committee and our association.”

In addition to members from 9 counties across the state, the committee also includes ex-officio representatives from the NYS Department of Environmental Conservation, the NYS Energy Research and Development Authority (NYSERDA), and the New York State Association of County Health Officials (NYSACHO).

“Counties are feeling the effects of our changing climate in stronger storms, erratic weather, and invasive species,” said NYSAC Executive Director Stephen Acquario. “The Climate Action Committee, under the leadership of Deputy Commissioner Brown, will be vital to our efforts in the coming year to advocate for resources counties need to harden resilience and transition to clean energy.”

Brown long served as Sullivan County’s Sustainability Coordinator, and she continues to oversee the Office of Sustainable Energy. Her volunteer NYSAC role, as Chair of the Climate Action Committee, is to review State policies on climate sustainability, adaptability and resiliency, and advocate for legislation that addresses those issues with counties in mind.

“We have had some very productive conversations about product stewardship, and there is a strong interest in advocating for expanding the Extended Producer Responsibility (EPR) legislation in New York to include several existing and emerging technologies, such as solar panels and batteries,” she explained. “Our goal is to shift the financial and managerial responsibility for the environmentally responsible end-of-life management away from municipalities and taxpayers, and toward the producers and manufacturers of the products.”

The committee is also evaluating the proposed Clean Water, Clean Air, and Green Jobs Environmental Bond Act of 2022, which will be on ballots this November, and is advocating for a Statewide revolving loan fund that will provide low-interest financing to municipalities and individuals seeking to institute protections against natural disasters.

“Our goal is to make sure New York’s counties are included and represented,” Brown stated, adding that she personally aims to keep Sullivan County “front and center” in her work. “We’ve established ourselves as a leader in environmental programs that work for local communities.”